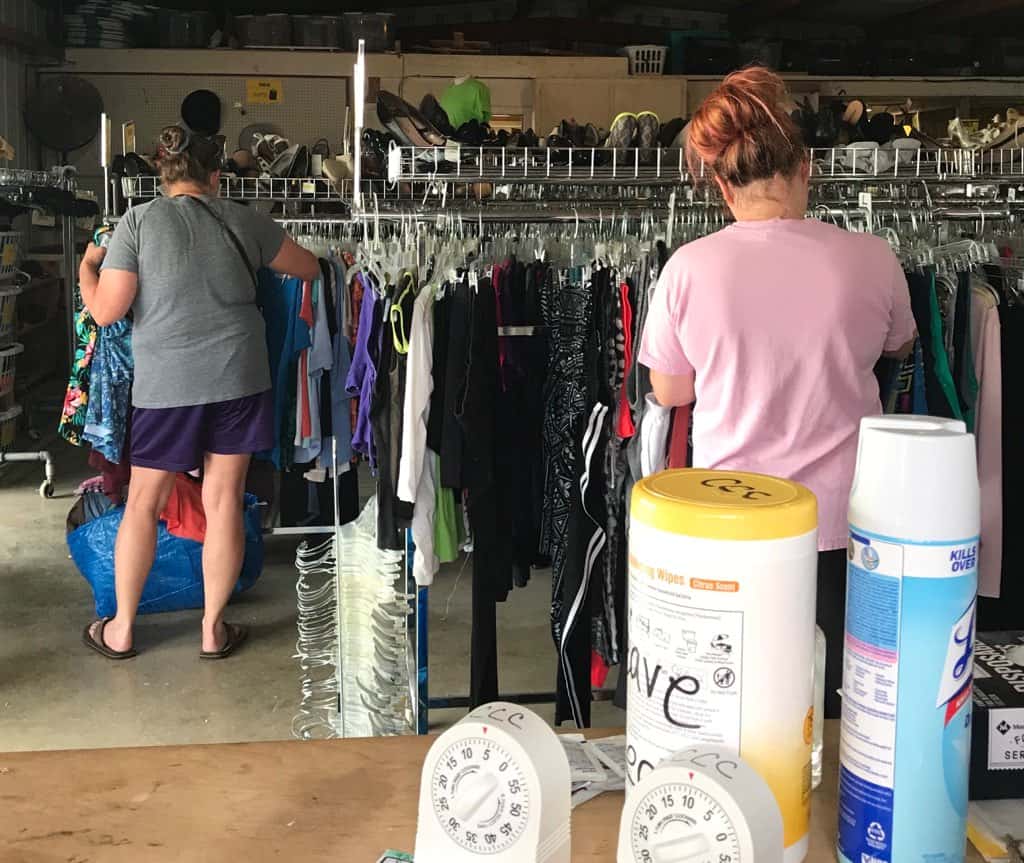 Gwen St. Clair didn’t bat an eye when she casually mentioned that she, Executive Director Joanna Johnson, and the rest of the great folks at the Community Clothes Closet in Justin were going to celebrate the organization’s 10th anniversary all month long in January. After all, no rule says you have to observe an anniversary for just one day.

“We’ve managed to keep it going all this time with volunteer help,” St. Clair said. “Who knew it would last this long?” Somehow, St. Clair knew it would. She had been working at a booth at a local antique shop when Johnson came up with the idea of opening a charitable Christian outreach shop that provides free clothing to individuals and families in need. Their clients could range from families struggling financially to those who recently suffered an unforeseen hardship such as job loss, fire or flood, surgery, or something in between.

Regardless of the reason, the Community Clothes Closet would be there to help if someone was struggling. And rather than have their efforts sponsored or funded through a government entity, church, or other organization, they’d operate independently, all while relying heavily on the kind hearts of volunteers, residents, and community groups to help keep shelves full and hangers loaded.Their goal is to provide clothing for everyday life — complete with a shopping experience unlike any other.

“The people in our community and surrounding communities donate their clothing to us because they know it’s going to others in our community who really need it,” St. Clair said. “We sort everything and put them into categories. There’s a men’s area, children’s area, maternity area, etc. And they come in by appointment and shop.”

The growth that the Community Clothes Closet has experienced over the past 10 years is mind-boggling. Their first location was a small room inside the Justin Trading Post. Five months later, they leased a warehouse. By May 2017, they were in a three-building complex, and a bonus building fulfilled their dream of a retail outlet.

Today, they serve an average of 156 families each month with everything from shirts and pants to shoes, socks, kids’ clothes, jackets, new underwear, toys, and more. Those families represent 64 communities, including Justin, Denton, Fort Worth, Rhome, Ponder, Decatur, Krum, Little Elm, Keller, and Argyle.
Since 2012, the Community Clothes Closet has distributed 593,240 items, with 82,471 of those items being donated in 2021 alone. And when you factor in that the average cost per item at a traditional thrift store is $3, they’ve saved families approximately $1,779,720 that can instead be used for housing, food, and
other essentials.

“We had a woman come to us six months ago. She was getting ready to have shoulder surgery, and her doctor had told her that she needed a bunch of button-up shirts to wear during her recovery,” St. Clair said. “Rather than go to Walmart, she thought of us first. We ended up giving her a bunch of men’s shirts to help her through. And when she was [healed], she brought them all back. The point is that everyone’s needs are different, and we want to help whenever possible.”She added, “People put our name out there on social media whenever someone is asking
for help.”