Neither rain, wind, nor dark and angry clouds discouraged nearly 700 people from purchasing tickets to the Flower Mound Summit Club’s first Annual Smoke Fest on May 15 and 16.

The I’d-know-it-anywhere aroma of Texas-style barbecue smoke floated into the air from the top of the Marriott Courtyard parking garage, which is where the 20 teams gathered around their cookers on Saturday. The following day, ticket buyers tasted the results, and the winners were announced. 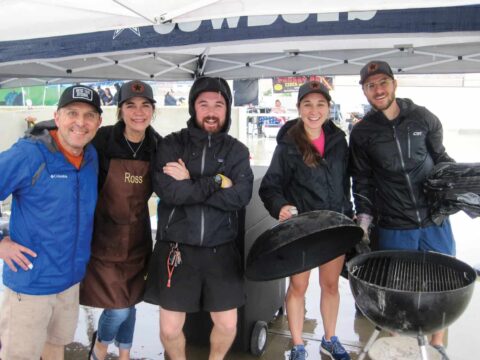 There were three competition categories: chicken, spare ribs, and brisket. The top five places in the chicken and spare ribs paid from $400 to $50. Brisket, considered the elite member of the barbecue family, paid from $500 to $150. First and second place Grand and Reserve Champions received $300 and $200, respectively. Perhaps the most coveted title was the Peoples’ Choice distinction. This is the one that pleased the most taste buds. Votes were cast by the taster by dropping a ticket into the bucket stationed next to each team’s cooker. The top five places earned from $400 to $50, with a total of $5,000 given during the Fest.

The rain began falling while Fest-goers savored their samples, but there were no serious problems. Everyone huddled under protective canopies and simply continued eating.

Co-sponsored by Cornerstone Staffing, the vendors present for the Smoke Fest could not have been better chosen. They included Buttermilk Sky Pies, Handel’s Homemade Ice Cream, Nothing Bundt Cakes, Bubba’s Kettle Corn, O-Face BBQ, and Grill This BBQ Supply. 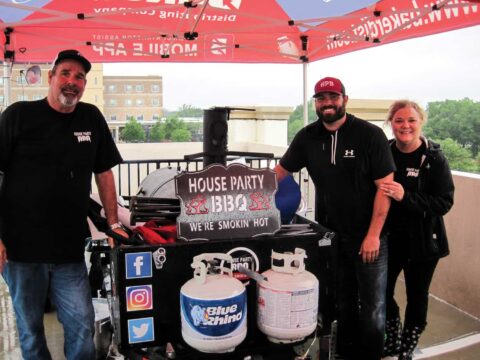 The Smoke Fest is the latest addition to the Summit’s event schedule. Established in 1974, the 50-man-strong group is Flower Mound’s oldest fraternal organization. Its primary focus is leadership through various forms of community service, with the specific intent to teach youth the importance of giving back for today as well as for the future.

Club members are adept at flipping hotdogs, hamburgers, and even pancakes — all while offering their charitable dexterity to a broad array of non-profit organizations other than their own. Claudio Forest, president of the Summit Club, offers a brief but beautiful summation: “We help people,” he said.

Helping people isn’t necessarily easy. There’s a ton of planning and accompanying implementation. Hours on the telephone. Networking. Rounding up event sponsors. It all takes time, and, for someone such as Claudio, who owns two businesses, time is a precious commodity. 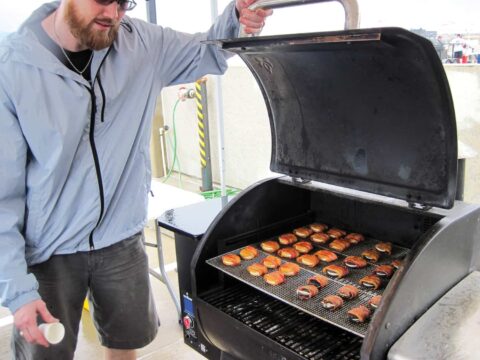 “It’s a labor of love,” he said. “I can’t even explain the giant reward I receive when I hand a kid a hot dog, and his face lights up. Our Western Saloon and Casino Night in March is our major, annual fund-raiser. It brings in $20,000-plus, which is money we use for charities and two scholarships to NCTC each calendar year.  We couldn’t have Western Saloon this year because of COVID, so we waited until May and launched Smoke Fest. Western Saloon will return in 2022, but we also intend to make Smoke Fest permanent. Its place on the event’s roster will just move to the Fall in 2022.”

Academics are high on the Summit Club’s list. In addition to the two college scholarships, the organization also presents awards and prizes to 78 students from the fifth and eighth grades.

“One of the things that impress me the most about this program is when we see one of those fifth or eighth graders return a few years later and apply for one of the college scholarships. It’s proof of how giving back improves the future of the community. Of course, everything we support must be specific to Flower Mound, whether it’s an individual resident in need, scholarships,
charities, Scouts – whatever.”

Easter Sunday Sunrise Service is another community event that is near and dear to the Summit Club, with more than 1,400 people attending this year. Club members deliver the three big, wooden crosses to The Flower Mound via trailer. It takes five to six men to carry and plant the middle cross, making you wonder how only one man did it all those years ago. The crosses are returned to storage after Easter.

The Summit Club has 30 to 35 events on its schedule each year. They do a great deal to benefit police and firemen. And, of course, children hold a special place.

“Each one of us loves the ways we give back,” Forest said. “Helping people. It’s what life’s about.”