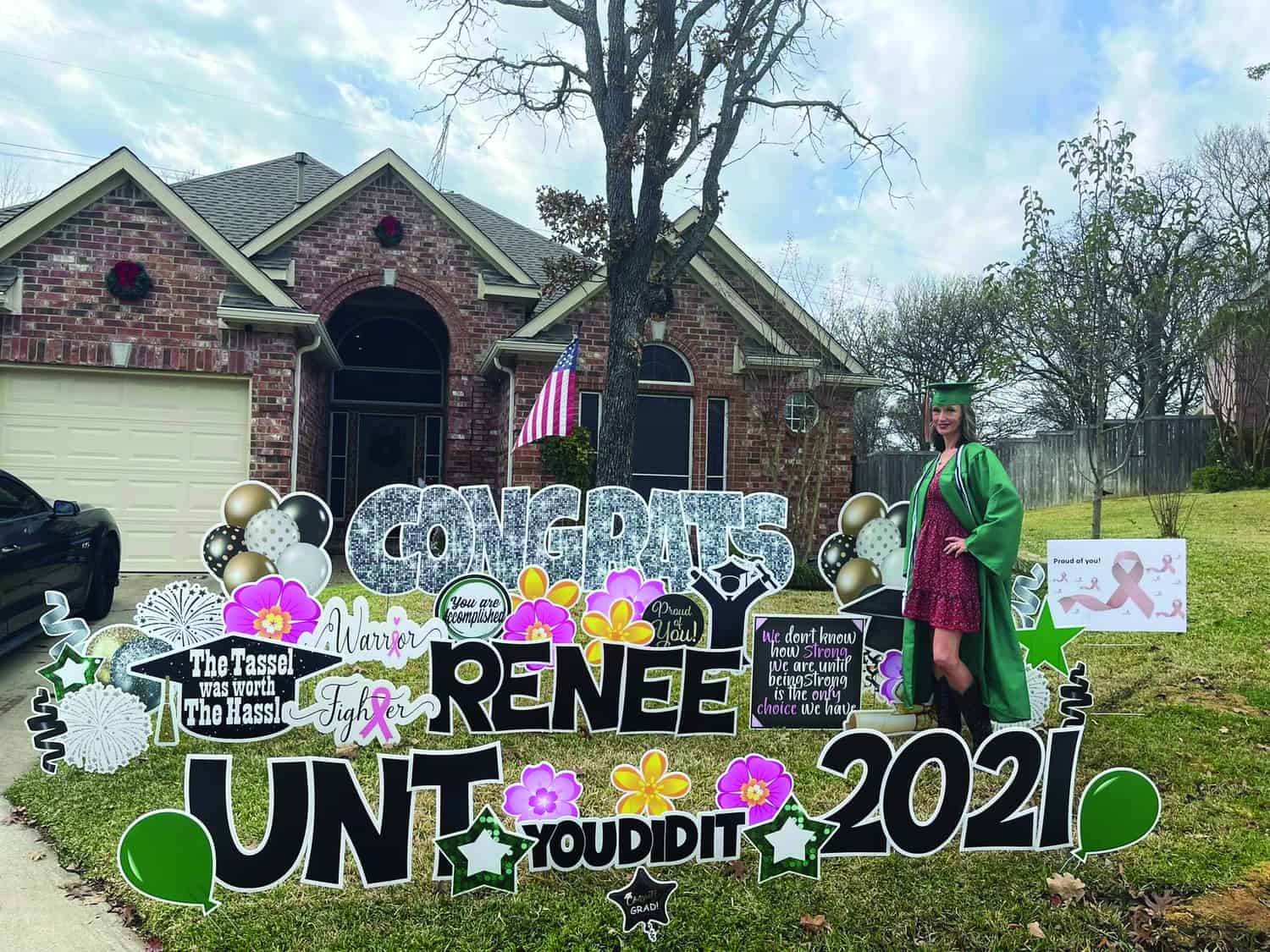 The Tassel was Worth the Hassle

Cancer sucks. Getting a college degree at the same time seems inconceivable. And yet, Highland Village resident Renee McMahan tackled both hurdles with a determination and positive spirit that now has her eyeing a new career.

In December, the 49-year-old wife, Army veteran, and mother of two earned a Human Resources degree with a minor in German from the University of North Texas. She accomplished this feat despite a 2019 diagnosis of Stage 3 endometrial cancer and Lynch Syndrome, a genetic mutation that makes a person more susceptible to various cancers, like skin, colorectal, brain, and reproductive cancers.

She only missed one semester along the way and now wants to share her inspirational story with others.

“I really enjoyed going back to school as an older adult. Granted, it was hard with the surgeries and lots of pain. But I always took it one day at a time. I never saw myself not making it,” McMahan said.

She added, “You have to have a positive mental attitude. I wasn’t going to give up.”

In 2013, McMahan left a successful IT career to focus more on her kids and mother, Visha, who was in the final stages of her own cancer battle. The day after she resigned from her job, McMahan got a call from her brother, Ryan, who shared the devastating news that Visha had passed away.

A couple of more years passed and McMahan made the decision to go back to school rather than get back into the IT world. But she wasn’t taking care of herself physically. In many ways, she was still struggling from watching her mother’s cancer battle and was petrified that she might suffer a similar fate.

“In my head, I was thinking, ‘I’ve got cancer, but I don’t want to know because I saw what my mother went through.’ So I tried to ignore it,

but I was in too much pain and finally went to the doctor. They thought I had adenomyosis,” McMahan said. “So they told me, ‘Let’s do a hysterectomy, and you’ll be fine.’ This was in 2019. I went in for the surgery, and when I woke up, I was told that I had cancer. I was one step away from Stage 4; it had spread to my lymph nodes, and they couldn’t even finish taking out my ovaries. Mind you, I was in school at the time and immediately started chemotherapy.”

McMahan said chemotherapy alone almost killed her. She lost a bunch of weight, and the treatments did nothing to aid her cancer battle. Thankfully, she switched to immunotherapy in January 2020. Within three treatments, her cancer was reduced by 50%.

“I still go every three weeks for treatment, but I’m living my life right now as if I’m in remission,” she said.

McMahan did the hard work beating cancer and getting herself through college, but she said she couldn’t have done that without her family. Her husband of 20 years, Kevin, was always there to push her and love on her whenever she needed it most. Her daughters, Zoe and Tiffany, are a constant source of motivation, as McMahan wants nothing more than to ensure they always have their mom.

So when she came home from graduation day in December, it wasn’t a surprise to see the front yard of their home decorated to the nines with graduation decorations. This included signs with inspirational sayings ranging from “The Tassel was worth the hassle” to “We don’t know how strong we are until being strong is the only choice we have.”

“I just saw a friend who was diagnosed with breast cancer, and I told her that it’s going to be hard but that she has to take it one day at a time and focus on herself and her faith,” McMahan said. “I also try to tell people to get tested early. If I had been tested earlier, maybe I could have had a hysterectomy and been done. I’m just glad to be here. I want to be around for my kids, and this was something I always attacked with a positive mindset.”