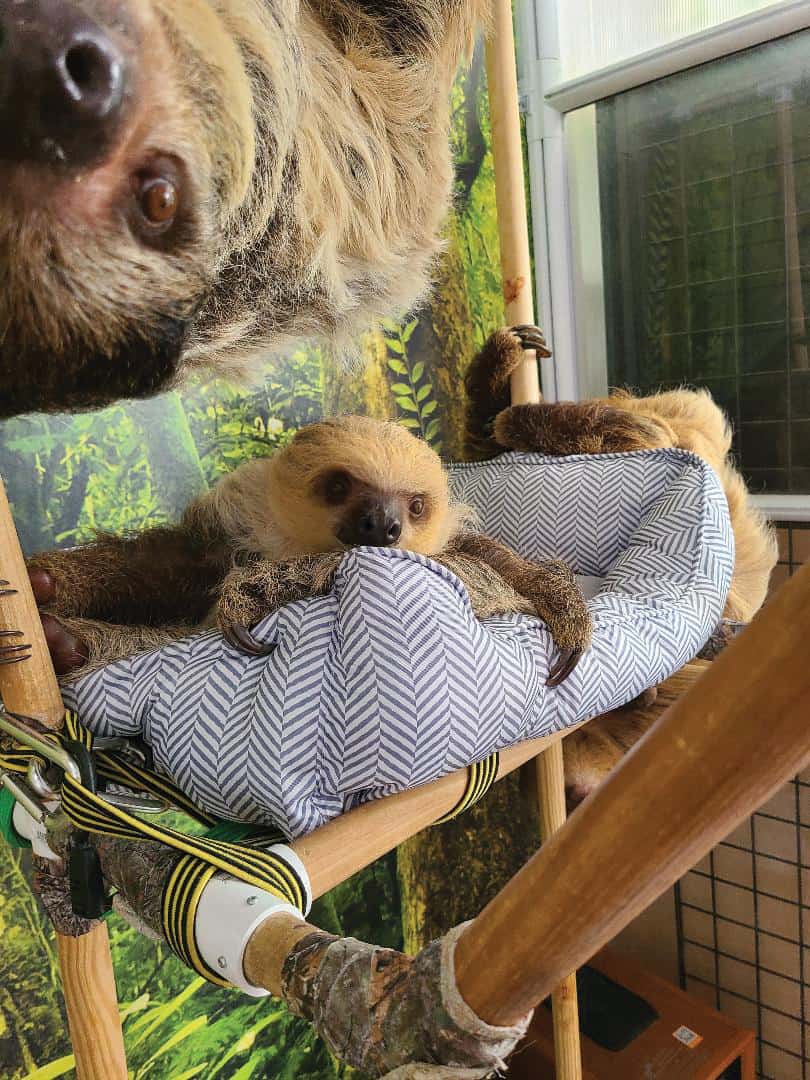 Things are pretty slow at Earthwise Pet Supply in Flower Mound. Slow, that is, for the sloths that hang around inside! Deana Otis, owner and manager of the store, also answers to “sloth mom.” And that’s just fine with her. She and husband, David, are proud parents of the world’s slowest moving animal. Initially, Deana’s interest was sparked when she and David tagged along on their son, Nate’s, mission trip to Brazil. Deana learned everything she could about sloths, then penned her name to a sloth rescue list for adoption.

Eight months later in January 2015, the couple adopted a 7-month-old sloth rescued from Guyana. Thinking it was a female, Deana named her Sandy. The two immediately bonded.

“Having such a great experience with Sandy, when I heard of an opportunity to adopt another sloth from a sloth parent, I jumped at the chance,” Deana said. This time, it was a male already named Sid. Turns out, Deana was wrong on both counts; Sandy is actually a male, and Sid is female! The reproductive organs of both male and female sloths are internal, so it’s very difficult to determine their gender. How did she learn the truth? “Sandy and Sid have a baby, and Sid gave birth!” Deana exclaimed. The adorable 9-month-old baby sloth, or cub, is named Sammie, but you never know – it just might be a Samantha!

“Ours are two-toed sloths,” Deana added. “Three-toed sloths are protected and aren’t adoptable.

Nestled inconspicuously in the Marketplace at Flower Mound since 2014, Earthwise Pet Supply is a hidden gem for pets other than sloths, too. The store carries all-natural food products, as well as toys, chews, treats, leashes, and more.

“If your pet has allergies or digestive problems, it probably can be taken care of with diet,” Deana suggested. As a certified nutritionist with 500-plus hours in pet nutrition, she’s happy to advise shoppers about their food choices.

The sloth family lives in roomy greenhouse-like accommodations within the store, allowing shoppers to watch them do, well, very little. Sandy has his own home, (until Deana decides she wants to be a sloth grandmother once again), but he’s given supervised family visits. Mama and baby are right next door. Humidifiers and consistent temperatures of around 78 degrees are maintained to simulate the climate of South America. Inside each house are plenty of climbing bars, pet beds, and blankets.

Stop by the store and view these captivating and lovable creatures. For a nominal fee, reserve a sloth exclusive and feed them in their habitat! They love blueberries and sugar snap peas, among other fruits and vegetables. A Sloth Spot membership subscription gives you 24/7 access to a sloth cam and a discount on meeting the sloth family face-to-snout.

Deana and David also take Sid on the road to classrooms for educational seminars. And Sid will join the celebration as a special guest at your child’s next birthday party.

In addition to numerous pet products, the store carries a selection of sloth-related souvenirs to remember your visit, including David’s own sloth-inspired children’s book, Sandy the Sloth and the Danger of Diablo.

Visit Earthwise for a totally unique experience, and you’ll enjoy it slow much. It won’t take long before you have a soft spot for the Sloth Spot!