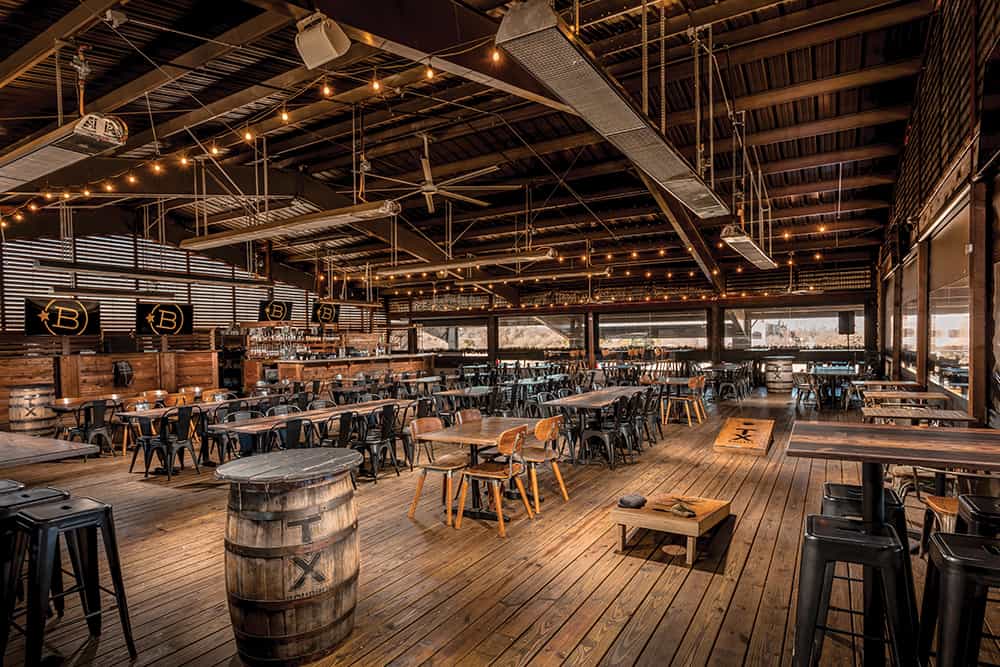 Marty Bryan, owner of Marty B’s in Bartonville, laughs easily and often. He also has a habit of finding joy, along with a good shake of gratitude, in just about every corner of life. Capping off those positive attributes is his “never-met-a-stranger” attitude that propels him to the people seated in his restaurants.

It’s the native Texan blood flowing through his veins that prompted Bryan to first conceptualize his larger-than-life eateries.

He came from ranching cowboy roots. He worked cattle from horseback. He branded and he roped. He mended fence, and maybe best of all, he rodeoed. He never passed up a chance to buck a bronc out of a chute or toss a loop over a steer.

Even in those early days, Bryan had a non-stop mind hard-wired to creative channels. Challenges were embraced and he was always learning. He judged cattle and horses through the Future Farmers of America program, and he was instrumental in developing some of the organization’s procedures. This laid the base for his fascination with business operations.

“I loved everything about the cowboy culture,” Bryan said, “but I never considered making ranching my life’s work. I knew early on that I wanted to be a part of the service industry. I’m a strong people-person, and I wanted to add value to the lives of as many people as possible.”

Bryan spent a year and a half in college classrooms, but a desk wasn’t his style. “I couldn’t concentrate on books when all I thought about was working and making money,” he admitted. “I dropped out when I was asked to go to work for a restaurant. I cooked and did a lot of other things. I loved it! I was home!”

Bryan hired on with Outback, traveling around the country opening dozens and dozens of new locations. He thrived and he learned, and he met Brian Gasperson.

He switched his allegiance to Cotton Patch restaurants in 2003, which is when he hooked up with colleague Alan Mann. He spent nearly 13 years with CP, leading the popular chain’s product development. He also formulated a clear vision of his future, which was based on his passion for cooking and his now well-defined desire to own restaurants.

“The concept of what I wanted was 15-years in the making,” Bryan explained. “I didn’t just wake up one morning and decide to open a restaurant. I wanted more than that. I wanted to give people a true experience, as if they were eating deep in the Texas Hill Country.

“My mental concept included a huge, barn-like building with open fire pits and a roping arena. I pictured it off the beaten path, with gravel parking lots to add to the country feel. I worked as hard as I could to offer something that made people feel welcome and at home, like a family reunion whether someone was dining alone or with a group. Today, it’s rare that families sit down together at the family supper, or dinner, table. Sharing food is supposed to be a special kind of bonding experience. Don’t forget, even Christ had a ‘last supper.’”

But what about that “bonding” experience? Is it possible to create it in an enormous building that seats 1,200 people, plays loud music, keeps three bars hopping, and requires 250 smiling, friendly, efficient, quickly moving wait-staff? Of course not but, somehow, Bryan managed to pull it off at Marty B’s with its Austin stone, cedar beams, and fire pits begging for chocolate-dripping s’mores.

The food at Marty B’s is as Texas as the physical venue, with a special twist. Every piece of meat served  (beef, pork, chicken – EVERY MEAT) contains NO hormones, antibiotics, or preservatives. It is all-natural and humanely raised.

Next, Bryan and Mann gifted the dining scene with 1845 Taste Texas in Lakeside. The interior reflects the opulence of Dallas, while the menu screams Fort Worth.

Number four from the list of seven opens this September as a companion piece to Marty B’s. It’s a coffee shop. “Now we can say breakfast, lunch, and dinner is served somewhere at our locations,” Bryan laughed.

The remaining three ideas? “I’m not ready to discuss those yet,” Brian answered.

Okay, but we can make one valid assumption. That is: They. Will. Be. Uniquely. Texan.