Shane Smith 15 Years As A Firefighter

The Lake Cities Fire Department serves and protects the towns of Corinth, Hickory Creek, Lake Dallas, and Shady Shores. Within the department, there are three fire stations providing fire, rescue, and emergency medical services to its citizens. As first responders, these heroes have made a commitment to protect life and property from fire and other disasters. Often, they are first on the scene when road collisions, collapsed buildings, and other devastating emergencies strike. They may face danger yet take these risks willingly and with compassion. Firefighting can be very rewarding, and that’s why so many have chosen it to be their lifelong career.

One such example is Shane Smith, who recently celebrated 15 years with the Lake Cities Fire Department. A perfect example of duty and dedication, Shane admits, “This is what I’ve always wanted to do since I was a boy.” And he’s been doing it for 17 years, beginning with graduation from the fire academy and obtaining his EMT-Paramedic license, the highest ranking in EMT training. 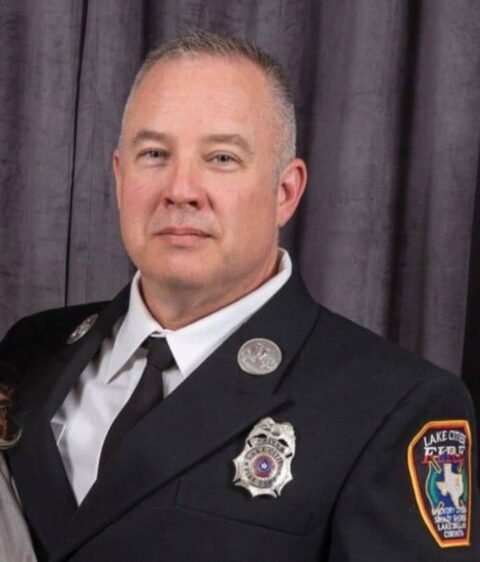 For the past two years, Shane has held the position of Driver/Engineer, living the ultimate dream – driving the fire truck. Still, this is a very technical position that requires him to know the vehicle inside and out and make sure every fire apparatus on the truck is in working order. Shane is also responsible for seeing that the daily activities performed around the station are carried out, such as washing the fire truck. “If the captain’s off duty I step into his role. So I need to know his responsibilities, too,” Shane explained.

The duty schedule consists of three shifts of 24 hours on and 48 hours off. Therefore, the firehouse is a firefighter’s second home where they not only work their shifts but eat and sleep, too. Trust in each other abounds, not only when duty calls but in their day-to-day routines. “You could leave a $100 bill on the table for days, and nobody will take it,” Shane said with a grin. “But don’t leave a pint of Bluebell ice cream in the freezer or it’ll be gone!”

Emergency medical services (EMS) make up the biggest part of the job for these Lake Cities firefighters, followed by fires and wrecks on the highway. For Shane, “The hardest shift I’ve ever had was during February’s ice storm.” Working non-stop, they handled over 100 calls, with the chiefs even helping to run those calls.

In addition to his career, Shane does have a personal life. He and his wife, Amy, have been married nearly 30 years, and their daughter Haley recently graduated from UNT. “My fellow firefighters are like family, too,” Shane reflects. “We’re a brotherhood and always have each other’s backs.”

Fire Chief Michael Ross shared some of the firefighters’ thoughts on Shane:

“He truly is a great individual who puts service before self.”

Assistant Fire Chief Chad Thiessen said, “Quite simply, Shane is compassionate and kind to people, and we are glad to have him.”

Whenever he retires, Shane and his family plan to travel more in their RV. Firefighters may retire at any age, but he is in no hurry to even consider leaving his ideal profession. After reflecting a moment, he remarked, “I hear the country’s oldest active firefighter retired in 2011 — at the age of 77.”

photos courtesy of Shots by Sheri