Running Into The Sunset

In her four years at Guyer, Brynn Brown ran her way to numerous state titles in track and cross country, shattered more state and national records than most people can count, and hauled in accolade after accolade. In her final high school race — the 1,600 — she ran the fastest time in the United States this year at 4:41.29.

Clearly, Brynn Brown is pretty darn fast, and everyone has been lining up to shower her with praise. That includes officials at the House of Representatives of the 87th Texas Legislature in Austin.

Representative Lynn Stucky led that charge in passing HR 1164 on May 24 to honor Brown and her many accomplishments during what was undoubtedly one of the more decorated high school careers you’ll ever see. The resolution provides a summary of Brown’s blistering times, state titles, and various high honors and formally congratulated her as she closed out her high school career and prepares to run for the University of North Carolina.

Brown and her family were there in person to accept the honor.

“It was exciting on the House Floor today! I was able to recognize Guyer High School senior Brynn Brown on her amazing accomplishments in Cross Country and Track throughout her high school career,” State Representative Lynn Stucky said in a Facebook post on May 24. “Sharing this young woman’s success with my colleagues was truly an honor for me — as there has truly been no other like her.” Representative Stucky wasn’t wrong about that last part. Brown proved to be one of the more dominant distance runners Texas has ever seen. She ended her high school career with five state championships — including winning the 3,200 and 1,600 on consecutive days at the UIL state meet on May 8 and 9. 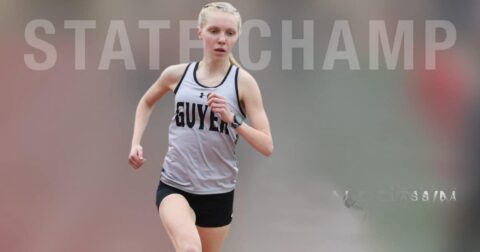 “I just love seeing where that limit lies,” Brown told the Denton Record-Chronicle just before the state meet in May. “I think running can be viewed as a selfish sport, because it’s just about you out there, especially in track. But I think at Guyer, I learned a lot about the team aspect and my why, which incorporates my family. I just love representing Guyer and that community aspect of running.

“I don’t think [I’ve found my limit yet]. I think there is a lot of digging to do. I think the ceiling hasn’t been reached yet.”

Brown’s rise to stardom didn’t come without adversity. As a freshman, she suffered an injury that kept her sidelined and could have ended her career. But true to form, she spent the next couple of months rehabbing and was as good as new by the start of the 2018 track season. According to the Denton Record-Chronicle, Brown became the first female cross country runner to clock a time of under 16 minutes, 20 seconds in a 5-kilometer race more than once in the same season last October. Fast forward to March at the Texas Distance Festival, Brown turned in a blistering time of 15:56.89 to set the record for the fastest 5,000-meter high school race in Texas history.

All the while, Brown maintained high marks in the classroom and spent her time off the track volunteering locally on behalf of a children’s camp for Cardiovascular Intensive Care Unit patients, per a Gatorade press release.

“She’s in a different league than most,” Guyer girls track coach Megan Sprabeary told the DRC. “But that’s what makes her so good. Those exceptional athletes have to have something that is different about them. It’s not just their abilities. Those can only take them so far.”

It should go without saying that while Brown has officially graduated from high school and is moving on to her days as a Tar Heel, all of her fans back home can’t wait to hear the news of her next record-shattering performance.

It will happen sooner rather than later — because Brynn Brown is that darn fast.