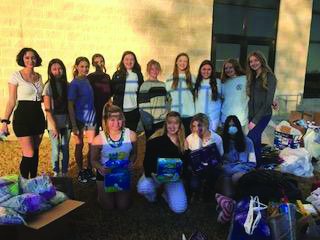 Since it started nearly a century ago, the National Charity League has brought mothers and daughters closer together to help less fortunate people in their communities. Among the 290 local affiliates is the Texas Lantana Chapter (named for the Lantana flower, not the community) for those living in the Argyle, Lantana, and Ponder school districts. One member – Denton Guyer High School senior and Lantana resident Ryley Patten – recently applied for and received a TickTocker Action Grant used to execute a campaign providing feminine hygiene and care products for those who couldn’t afford them.

TickTocker is the name given to girls who join the organization in seventh grade and remain until they graduate from high school and is not associated with the popular TikTok
mobile video site. Mothers are called patronesses.

Patten and her fellow chapter members collected 10,000 products that were distributed in partnership with Denton County Friends of the Family in late January. Chapters select non-profit organizations to help on-site with Texas Lantana partnering with others including the Tarrant Area Food Bank, Our Daily Bread, Up Ministries, Area Rescue Foundation, Serve Denton, Keep Argyle Beautiful, and Shiloh Gardens. The chapter also volunteers time at Dogwood Estates in Denton calling bingo and hosting other events for residents. According to Ryley’s mom, Cathy, Texas Lantana has donated 3,687 hours since last June.

“You can pick and choose which ones you want to help,” Cathy said. “You find these different areas and if you find something you like you can go back and repeat it or do some
different things.”

Other recent efforts found the Texas Lantana daughters dressing up as elves and passing out presents during the holiday season. Another was honoring first responders at 26 police departments and fire stations in Argyle, Denton, and Lantana on the 20th anniversary of the 9/11 terrorist attacks last September.

“You are spending time helping the community and it also helps you work around your business schedule,” said Ryley, who is heading to New York University later this year to continue her love of acting.

Ryley and Cathy learned about NCL six years ago from Kristin Jenkins and her daughter Sarah, a friend of Ryley’s. Kristin, along with Abby Ray, Jennifer Harrison, Brandi Jackson, and Audra Laneri, founded the Texas Lantana group. Kristin’s mother, Sue Coffey, helped launch the Houston chapter and Kristin and Sarah were part of the Plano chapter before moving to Lantana.

Currently, there are about 300 moms and daughters in the Texas Lantana chapter. Members raise funds and pay dues to help monetize their efforts. The $125 per-person annual dues help fund four major yearly events – the kickoff celebration in August, a junior style show in October, senior recognition in February, and awards-installation tea in April. Each grade level also schedules other events throughout the year including age-appropriate guest speakers and field trips. Sometimes the older girls talk to and mentor the younger girls.

Moms meet on the first Monday of each month and daughters on the last Sunday. Each participant is asked to contribute 15 hours each year to philanthropy.

“It’s been really good with all the different areas that we’ve been able to get involved in,” Cathy said. “Whether it’s calling bingo on a Sunday afternoon with the senior citizens at Dogwood Estates or unpacking food for the food bank and loading it into cars. You make the most of it, you have fun and we’ve really got to meet a lot of great people. It’s been a great experience for us.”

Girls and mothers wanting to join are referred to the chapter, then complete an application and learn about the time commitment. Visit nationalcharityleague.org/chapter/texaslantana/ for more details.