For many athletes around the world, becoming an Olympian is only a mere dream. It is a monumental goal that very few people ever see come into fruition. But for 12-year-old Denton County local Karsen Kirkpatrick, this is more than just a dream. It’s a dream come true.

After battling to qualify for the Junior Olympics, Karsen not only succeeded in qualifying for the Junior Olympics in the women’s 10-meter air pistol event, but she also was the only person in the state to automatically qualify. “Karsen beat every single person, all men and women up to 20 years old.” said Brian Kirkpatrick, Karsen’s father.

To beat out every competitor in any type of sport or competition is highly worthy of praise. But what is truly amazing about Karsen’s success is that she has only been practicing this sport for a year. She beat out every single one of her competitors and dominated against many athletes that had much more experience.

“Karsen had played tennis competitively since she was 3 years old. But, eventually, she got burnt out. So I started looking for something else for her to get involved in.” Brian said. This is when he found women’s air pistol. Thanks to her dad, Karsen was familiar with how to handle a gun. Brian began taking his girls to Eagle Gun Range when they turned 10. “I’m a dad who only has girls. I didn’t want them to be afraid of guns. I could either tell them to stay away from guns or teach them how to handle them properly. I chose the latter.” Brian said. 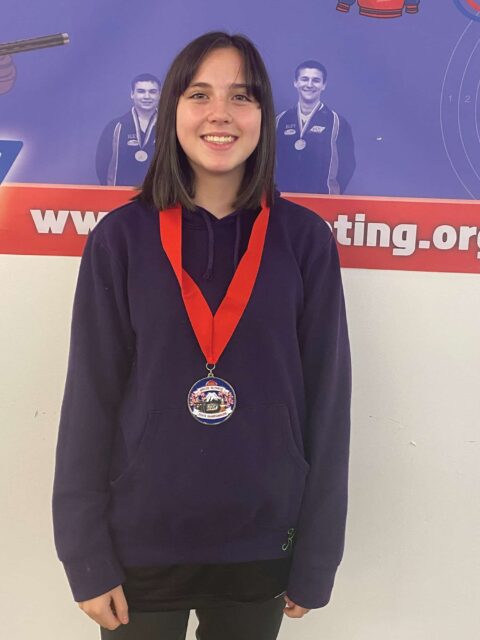 From the years of playing tennis, Karsen was used to running, sprinting, and endurance. “This was the exact opposite,” Brian said. “You have to use a ton of muscles to keep your body super still. If you move a hair, your shooting goes wrong.”

The very expensive guns used in this sport weigh a little over two pounds, and each match lasts 75 minutes. You must hold the pistol with one hand while keeping your arm extended for 15 minutes straight. “Two pounds doesn’t sound like much until you have to hold it steady for 15 minutes,” Brian said.

Karsen had the option of choosing between a pistol or a rifle to shoot with, and after shooting both, she decided on a pistol because it felt more comfortable. Brian said that her coach, Gabe Schaller, also shoots pistols and shot on the pistols team at MIT. “He’s a really good guy. He’s very patient.” Brian said.

While Karsen and her family are celebrating her success of being the sole person in Texas to automatically qualify for the Junior Olympics, Karsen is already looking towards the future. “She is already thinking about attending Texas A&M to shoot on their pistol team,” Brian said.

Now that Karsen has made one dream come true, she has now begun to focus on a new dream. USA Shooting uses the Junior Olympics to identify individuals for the National team while also selecting Olympians. Her new goal is to make it to the 2024 Olympics in Paris, France.

When an individual is aiming for such high goals and dreams, it is always so important to have the support of the community and the people around you. And while Karsen certainly has the love and support from her family and friends, she was also honored with two amazing sponsors that have gone above and beyond for her, this includes Eagle Gun Range in Lewisville, as well as the company that actually manufactured her guns.

At such a young age, Karsen has managed to achieve great success. She has proven herself with not only talent but also dedication and discipline. Karsen Kirkpatrick is shooting for the stars, and her community of Denton County is excited to watch her shine.