Anyone who has ever shot a gun before could tell you that it takes a combination of form, concentration, and technique to hit one’s target. Now imagine taking those skills and transferring them from ground to horseback! 14-year-old Reese Guier has competed in the fast-action, competitive sport of Cowboy Mounted Shooting since she was 11. 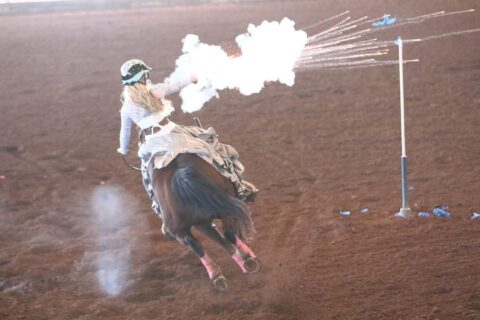 Cowboy Mounted Shooting is a growing equestrian sport that has been around for many years. According to the American Quarter Horse Association, it is a timed event that uses a set of 10 balloons attached to strands. They are set in one of over 50 approved patterns. These patterns can include advanced maneuvers such as turning around a barrel or switching direction and riding through a narrow opening. A rider uses two .45-caliber, single-action revolvers, each carrying five rounds of blanks. The rider must cock the gun before each shot, and upon firing five shots, they must holster the first gun and unholster the second while on the run. Time is added on for missed targets, and the contestant who completes the course with the fastest time is declared the winner.

“She started in Western Pleasure, which wasn’t fast enough for her,” states Lindsay. Western Pleasure is where contestants travel the perimeter of the arena while asked to walk, jog, lope, and reverse their horse at the direction of a judge. Horses are judged based on their quality of movement following the commands while staying calm and traveling on a loose rein. “Three years ago, she took an interest in barrel racing, which she does some.”

Reese’s trainer allowed her and other trainees to practice shooting, where Reese took to it immediately. She started in the Wrangler Open class, where competitors ride through the pattern with guns pointing, not shooting, as competitors must be at least 11 years old to begin shooting.

“By the time she was 11 and ready to start shooting, she won the Wrangler Open World Championship. In November of 2018, Reese started as a Ladies Level 1 and is currently a Ladies Level 4.” 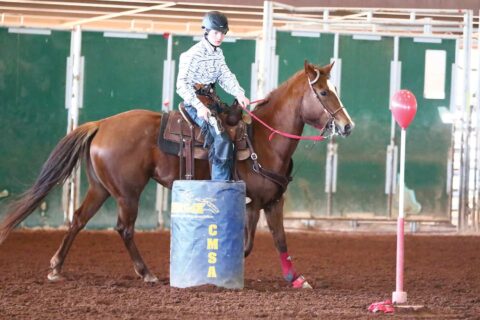 In order to advance through the levels, one must win a certain amount of “shoots,” depending on what level one is currently in. Level 6 is the highest skill level in this sport.

Lindsay shared a video of Reese in action. However, instead of shooting with two revolvers, she shot the first five balloons with her pistol before drawing a shotgun to shoot a cluster of three balloons before ending with two balloons while riding with no hands on the reins. Impressive doesn’t even begin to describe the exhilarating 14.364 seconds in which this took place!

Out of all the levels, Reese is ranked second in the state of Texas and has started an impressive collection of awards. Reese took home the 2019 Wrangler Open World Champion, 2020 Reserve Rookie of the Year, and 2020 Top 10 Overall Ladies High Point awards. Additionally, she has received seven Belt Buckles for winning overall at various events and competitions.

Reese attends Coram Deo Academy in Flower Mound, and since she has opted to attend school virtually, she is able to travel to all the shows across the country.

“Over the last year, we’ve been to Nevada, Tennessee, Arizona, Florida, Virginia, Oklahoma, Nebraska, Arkansas, and of course, all over Texas,” reflects Lindsay.

If Reese’s track record isn’t impressive enough, she is able to balance her busy schedule while still maintaining straight As in school.

Reese has two brothers who also compete in Cowboy Mounted Shooting. Shaun, who is 15 years old, recently started and is in the Men’s Level 1. Her younger brother, Brandt, who is 7 years old, started a year ago and is a Wrangler Limited. Reese plans to continue competing, and one day, she sees herself becoming an equine veterinarian.