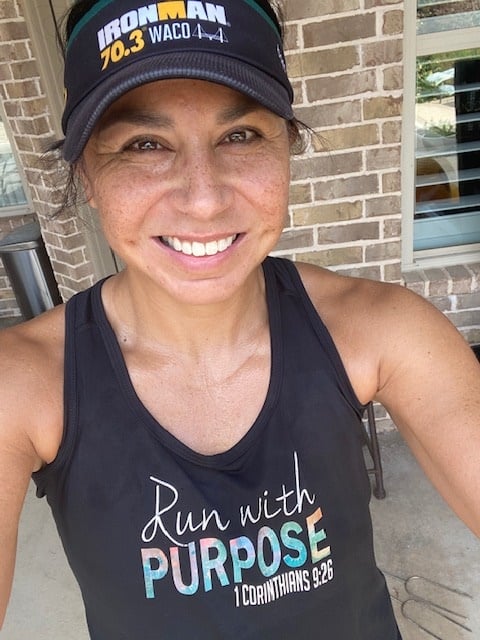 Every passionate pursuit develops its own following, becoming a mini society with a specialized vocabulary, goals, newsletters, standards, magazines, competitions, and awards. Car racing enthusiasts have such a world, as do swimmers, weightlifters, joggers, computer geeks, animal advocates, slow cooker lovers, and many more.

Ranking high on the list of specifically focused groups is the world of runners. You see them on hot, humid Texas afternoons; running, sweat pouring from their foreheads and soaking their clothes. You see the toned legs and lean bodies.

Runners fall into a variety of intensity levels. There’s the casual runner, who frequently becomes the half-marathoner and, maybe, the marathoner. Whether or not there is advancement depends almost exclusively on an individual’s sense of personal challenge; on whether he/she asks can I go faster and can I go longer.

Miranda Eserman of Lantana, a 44-year-old mother of four and a personal trainer for Body Bionics, began running recreationally 30 years ago.

“It was 10-years ago when I began training and becoming disciplined,” Eserman said. “That’s also when I started challenging myself. The first question I answered was, yes, I could run a half-marathon. Since then, I’ve completed six marathons and one triathlon.”

For those not familiar with the runner’s vocabulary, a marathon is 26.2-miles, with 16 to 20 weeks of preparation training. The word “marathon” is rooted in Greek history and the story of Pheidippides, who ran 25 miles (from Marathon to Athens) to deliver the news of a Greek victory on the battlefield. Anything longer than 26.2-miles is referred to as an ultramarathon, and Eserman is on the cusp of “Becoming Ultra.”

“I was on Instagram within the running community when I saw a post about Becoming Ultra,” Eserman said. “I read about the project and was fascinated. It was started by Scott Jones, a lifelong coach with an MS degree in exercise science. His goal is to get as many people as possible to start running, and he uses Ultra as the vehicle.”

This year marks the 10th season for Becoming Ultra. The program wraps around high-level coaching, extensive media coverage, and extreme accountability from the athletes.

“Applications to participate come from around the country,” Eserman revealed. “Based on those applications, plus videoed interviews by the coaches, eight individuals are chosen as featured athletes. They are matched, two-each, with four professional coaches. Among numerous other things, the athletes must commit to posting training podcasts a minimum of twice each week. This can be as simple as telling what happened in training on a particular day. For example, we have a husband/wife team where the husband has lost 150 pounds.”

This year’s race is 50K (31 Miles) on the Virginia/West Virginia border, on October 16, just in time for the beginning of fall foliage. One major deviation is it is a trail ultramarathon, which means contestants must clear obstacles such as giant tree roots, rocks, boulders, and more.

“We have four months of prep this season,” Eserman said. “That’s a little less than usual due to COVID. I’m training about 60-miles per week. Unlike road running, trail athletes must pack hydration and food supplies. This year’s route will be at an elevation of 4,000 feet, which means I’ve trained in parks for the trail effects and on an elevated treadmill.”

There are four, highly regarded, professional coaches. There is Scott Jones; Amanda Basham, a professional trail runner and endurance coach, with a BS degree; Hillary Allen, an endurance athlete specializing in ultra marathon distance trail running; and Ellie Greenwood, an awesome athlete who brings her own coaching style.

The athletes are “hooked” to their coach via an app, which transmits every training detail to the coach (elevation, speed, heart rate, blood pressure, recovery time, etc., etc.). In addition to scheduled virtual appointments, athletes may call their coach for consultation at any time. Runners do pay for these coaching services but, according to Eserman, “being chosen for the opportunity to sit under these coaches is an honor.

“The kids and I talk about things such as training and nutrition. But, just as importantly, they see my commitment and my refusal to quit, along with my dedication. They see me continuing to grow as a person and trying to become a better version of myself. If something like this is your dream or your goal, there’s no reason to put the fitness portion of it on hold. You can do it – even if you’re a 44-year-old mom with four kids!

“Running at this level is almost addictive and, yes, I’m pretty sure I’ll go for another one.”