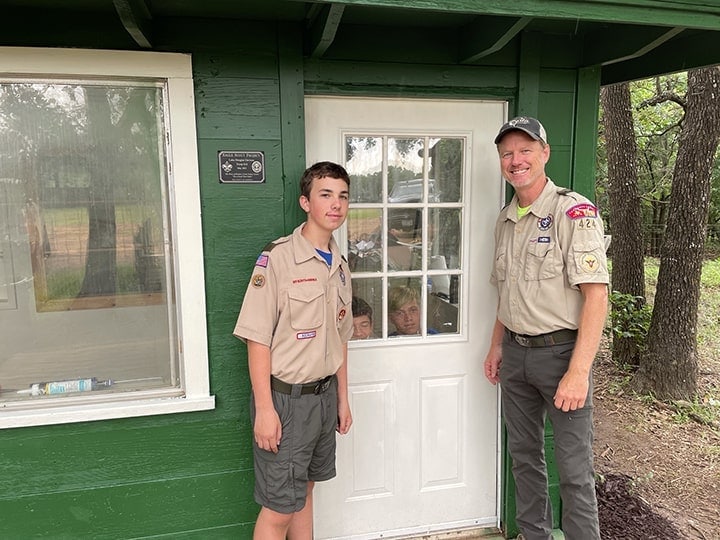 A Scout With A Purpose

By just about anyone’s standards, 14-year-old Luke Davison of Corinth is several steps ahead of the game when it comes to planning his life’s goals and how to reach them.

Luke is the product of a military family, with both parents (Steve and Michelle) serving in the Air Force. Steve retired after 29 years of active duty as a pilot. Currently, Michelle is a diagnostician for Denton ISD. Both Luke and his 16-year-old sister, Piper, are scouting lifers.

“I joined Scouts in kindergarten,” Luke recalled. “It’s a source of pride for me as well as a significant life influence. It’s taught me to appreciate the beauty and serenity of nature. And now, because of that, I want to do my part to protect and conserve what we have on this planet.”

Only 4% of the millions of Scouts have achieved Eagle status since 1911. It’s the highest rung on the achievement ladder, and getting there is a rigorous process.

Working toward this badge typically begins at 16 or 17 years old. Luke, however, already had more than his required number of merit badges at 14. High school was close and would bring new, time-consuming challenges. He decided to go for the Eagle.

Luke needed to choose a project that, when completed, would have a beneficiary such as the community, a church, a school, etc. His first selection, a local cemetery refurbishing, was turned down by the National Board of Review due to technicalities. That’s when John Smith, assistant Scoutmaster as well as Town Administrator for Hickory Creek, stepped in.

“Hickory Creek has a Nature Center project in the works,” Smith said. “It’s on eight acres in one of our parks and includes a walking trail and a monarch garden. There was an old, dilapidated fishing shack on the property that I thought would be an excellent Eagle project for Luke.”

Luke mapped out the renovation plans and took them through approval. Part of his job was to plan, organize, lead, and manage all aspects of the project. That included approaching local merchants for donated or reduced-cost project materials. He sold hundreds of bags of garden mulch earlier in the year to raise the necessary finances.

As the project manager, he planned delivery schedules and knew what needed to happen in each phase. Everything was photographed and documented. The paper trail from start to finish must be tight, complete, and easy-to-follow.

Finally, he assembled 15 Scouts as his crew, along with four adult leaders.

“The cabin is about 20 feet by 20 feet,” Luke said. “Part of the roof was collapsed, and both rooms were filled with bird nests and mud dauber. Floors and walls were rotted, so we gutted it. The town of Hickory Creek hauled away two utility trailers packed with debris. We painted the outside and the inside, repaired the collapsed portion of the roof, and installed new flooring. My grandfather, Wayne Buck, built the cedar shelves.”

All 81 hours of Luke’s work were documented and signed off in phases.

“My short-term goals include earning the three Eagle Palms and joining the Denton Civil Air Patrol within the next two years,” Luke said. “Since I want to become an Air Force pilot, I’ve already enrolled in JROTC at Ryan High School for my freshman year. I hope to earn my pilot’s license before I graduate. After that is the Air Force Academy in Colorado to become a commissioned Air Force officer.”

There should be no problem with acceptance to the Academy if high school brings the same straight A reports that he’s maintained since first grade!

One last detail: He’s already decided he wants to fly the KC-46 Tanker, a wide-body plane capable of refueling other properly equipped airplanes in mid-air.

There’s only one thing left to say…..Good Luck, Luke!